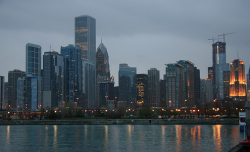 It always strikes me as odd how Chicago doesn’t always embrace its heritage as one of this nation’s most important cultural cities. A city-backed study revealed that Chicago is a “music city in hiding,” with lots of vibrant clubs and venues hidden from view. Sure, it’s fun to visit a club that doesn’t advertise or to show up at a wild VFW hall for a bizarre gig. But reaching out to larger audiences helps bands and venues thrive and say afloat, especially in a town with as much tourist and business foot traffic as Chicago.

A few years ago, 21 people died when a fight broke out in the cramped upstairs dance floor of the E2 nightclub. Pepper spray used to break up the fight caused partygoers to fear for their lives and cram down the narrow stairs to the exit.

City officials proposed a law that would make it easier to deter unlicensed nighclubs or parties by requiring independent promoters to:

If passed, this ordinance could put a major burden on smaller clubs and venues without doing a whole lot to ensure the safety of audience members. Traditionally, gig promoters rely on the liability insurance of rented-out spaces, so building in the cost of additional insurance and specific permits into event budgets would make many gigs unprofitable. Furthermore, club owners would have to consolidate bookings in-house, reducing the diversity of shows and (from my own experience) making it harder for up and coming acts to get booked at venues during off nights.
Greg Kot from the Chicago Tribune explores the proposal in greater detail, and I share his hope that lawmakers reject this well-intentioned but misguided piece of legislation when they vote on it this Wednesday.
[ Chicago skyline photo courtesy Flickr user webbmb, under Creative Commons license. ]
0