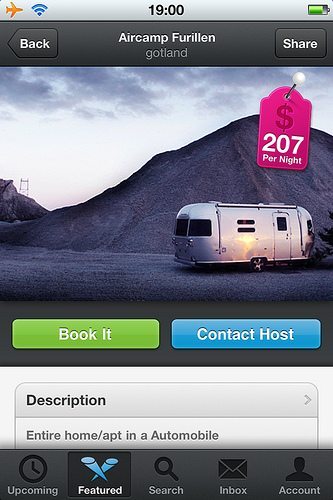 I’m usually the only voice in a room full of musicians and music managers telling folks to slow down touring until you’ve saturated all of the zones in your region. (Understand the Zone Booking Strategy I’m talking about by checking out More Gigs Now.)

One of the biggest reasons I ask bands to wait for big tours: finding safe places to stay can kill your profit margin, especially the first few times you venture out of your home area. Even your most passionate fans might only tolerate you crashing on their couches for just one or two tours before they expect you to be doing well enough to foot the bill for your own lodging.

That’s why I promised you a post about Airbnb. The name used to stand for “Airbed and Breakfast.” (Cute.) After a few cities felt that calling the service a “bed and breakfast” would actually subject some of the participants to hotel taxes and business permit fees, they shortened the name.

Instead of hunting on Craigslist for cheap places to stay in the towns where you have booked gigs, you can use Airbnb’s centralized directory of folks who have put together spare rooms or entire apartments for rent by the night. The cheapest options include extra rooms for about $40 a night that involve connecting up with your host by cell phone. I was surprised, though, by the number of standalone apartments, lofts, and townhouses in major city centers. It looks like some landlords and designers have discovered they can actually have fun and make extra cash renting to visitors by the night or by the week, without the hassles of long term leases. Some of the site’s hosts have even used it to prevent foreclosure.

While the service might not be ideal if you’re the kind of act that’s legally required to stay in a dive motel, solo or duo acts can really expand their touring options using Airbnb. Seeing dozens of ratings for a particular spare room or apartment gives you some added security, compared to diving blindly onto someone’s futon. And a small tour is a lot more doable with a $50/night lodging budget, than a more typical $200/night budget.