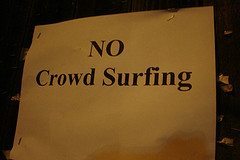 Depending on who you talk to, SXSW may have hit its own critical mass sometime in the past few years. From talking to folks who went this year, some of the best stuff was actually happening at many of the unsanctioned events, house concerts, and impromptu gatherings away from the main event venues. And that seems to hold true, whether you went to the film, the music, or the interactive portions of the festival.

A festival this big becomes a microcosm for what’s going on with the creative community as a whole. That’s why it’s troubling to hear so many reports of violence, accidents, and other careless behavior coming from Austin this March:

It’s often up to a band’s manager to make sure that road teams and performers think about audience safety. I’ve watched managers prevent their clients from making drastic mistakes ranging from drinking too much (or at all) before a show, all the way to setting off live fireworks during the stage. Admittedly, some managers approach these challenges from a fear of getting fined instead of from a place of genuine concern. Yet, every year, we hear more stories of situations where bands and managers placed their own egos ahead of common sense.

As an artist or a music management professional, you’re the last (and only) line of defense when it comes to ensuring the safety of your audience. If a talent buyer or a venue operator says “you can’t do that,” look past your frustration and understand how skirting the rules might result in real pain for people who really just want to hear great music. Challenge yourself to become a better performer: you can pull off a great gig without the special gear that terrifies the house engineer.

Take care of your people, and you’ll never have to worry about filtering your career through pain and regret.