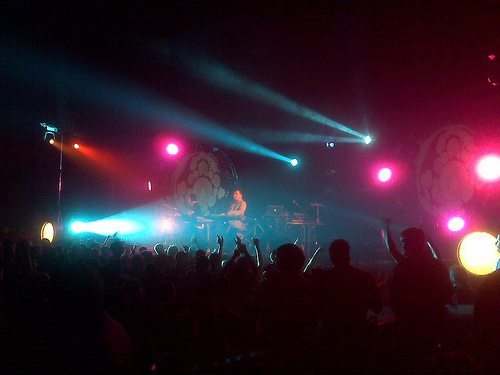 Most of the photos of artists that are put into bad light, sent to tabloids, and used in unethical ways, are from fan photos from the crowd. Or the non professional photographers that will sign any contract handed to them because they plan on selling and using the photos unethically in the first place.

As a result, an increasing number of touring acts now require professional photographers to sign waivers that essentially turn ownership of all shots over to bands or to their publicists. Long time photographers, accustomed to making money by selling shots to newspapers and magazines, can’t earn any money from pictures they don’t own.

The photographer calls out Steve Martin, founder of the New York public relations agency Nasty Little Man, for putting together some of the strictest release forms in the industry. Martin, in turn, suggests that artists’ managers only demanded stricter release forms after putting up with decades of exploitation.

Still, there’s very little stopping photos of live concerts from getting out into the wild. Bloggers and journalists from other media have been grabbing up photo passes, just so they can get access to the pit for a few songs. And fans throughout the world have figured out that they can snap photos and share videos using wireless phones.

You’re probably wishing to have the kind of problem that requires you to tell your publicist to stop having your picture taken. Still, setting some ground rules and expectations for fan (and professional) photography early in your career can set the tone for your overall audience support. If you want fans to share their experiences, encourage them to shoot and spread photos of you. And, if you’re worried that you don’t look good on stage, you may want to think fixing the reasons why, instead of trying to get people to stop taking pictures. As our Australian friend points out, people are going to take those pictures anyway.