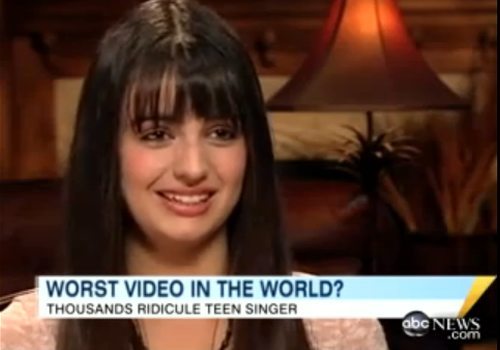 Rebecca Black made it into the iTunes Top 100 this week.

While Jay Frank’s analyzing the songwriting mechanics that make Rebecca Black’s “Friday” a chart success, I’ve been getting lots of e-mail and DMs about a new wave of song sharks using the viral video bandwagon to convince parents to sign their kids up for training and lessons as “the next Rebecca Black.”

And while it may seem unrelated, this post from Derek Miller about a company merger holds plenty of clues for artists, managers, and would-be rock star parents who wonder if there’s a short cut to getting signed. Derek looks at the press releases announcing a merger between blogging software company Six Apart and and a web advertising company called VideoEgg. He points out that we often use language to call out our future plans, especially the real roadmap for professional relationships. In this case, when a software company and an advertising company hook up, the omission of the once-flagship software product from the press release gives you a sense of where they want the new company to go.

That brings us back to the concept of a “vanity label.” According to RumorFix, Ark Music Factory is a production company/record label that allows parents to pay for their kids to feel like stars. And while the critical response to their work is dubious, at best, you can’t deny that they got some results. What worries me is that dozens of song sharks and scam artists are already surfacing, promising momagers that their kids can be “the next Rebecca Black” without a hint of irony. Clive Davis and Quincy Jones don’t have the time or the need to “discover” new acts at talent shows that charge $1,000 or more per band.

There is such a thing as bad publicity. Even if you think trade publications like Billboard don’t matter, you probably don’t want them trashing your single. And if you form an audience on the basis of a throwaway viral sensation, even a huge production budget won’t bring folks back for a second look.