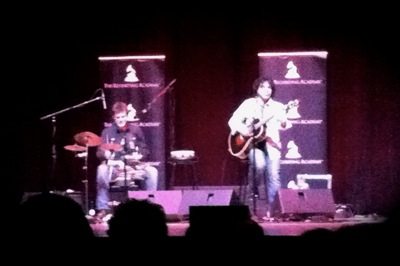 The Philadelphia Chapter of The Recording Academy welcomed Temple alum John Oates back to campus last Saturday night, for an intimate acoustic performance and an interview conducted by my friend and former colleague, Gene Shay. Mississippi Mile is Oates’ tribute to the songs that shaped his songwriting and performing career, and it lands in retailers tomorrow.

In front of an audience of industry veterans and aspiring students from Temple’s communications program, Oates revealed some candid details about his perspective on the past, present, and future of the music business. Five moments stand out:

1. The album’s dying. Oates acknowledged that audiences no longer invest the time it takes to absorb a whole album, admitting that splitting up the album into two sides during the LP era made it easier for listeners to digest a string of connected songs. Even though that sounds discouraging artistically, the shift frees up musicians to focus on pouring their energy into recording powerful singles instead of weak and watered-down albums. A single bad track can lead to poor reviews and lackluster sales, while a string of “hot” EPs can build real audience support over time, Oates said.

2. Embrace support wherever you find it. Oates recalled how early support for Hall & Oates singles from R&B radio in Ohio spread across the nation, enabling them to become what he called “the first modern R&B crossover act.” A traditional music marketing campaign probably wouldn’t have targeted specialty radio this way, but this grassroots support gave them the foundation to keep making records.

3. Don’t spend too much money making a record. Oates joked that the entire budget for his album was under $30,000, and that half of that was spent on hotel rooms in Nashville. While Oates remarked that he’s in the desirable position of having the means to self-fund the recording, he reminded the audience that working out songs and arrangements in pre-production can save a significant amount of money compared to projects that “evolve” in the studio.

4. Mastery of your craft makes recording so much easier. On Mississippi Mile, Oates hired a producer to enforce a “Dogme 95” recording style. (It’s not unlike what we used to do at World Cafe in the 90’s.) The rules: lay down the entire album in under a week, with no more than two takes on any track. Recruiting experienced engineers and musicians may have cost more “per hour,” but enabled the team to wrap up recording in less than a week.

5. Never surrender your master recordings. Oates warned emerging musicians in the audience to refrain from signing record deals that include copyright assignments. Although he intended to sell his new album “out of his trunk,” a chance meeting with an executive from Warner Nashville opened up a conversation about a new model for record labels. Taking “P&D” to a new level, Oates’ arrangement with Warner focuses the label’s efforts around promotion and distribution. The label fronts the cost of promoting the new album through its in-house team, but Oates retains ownership of his masters. When tracks start selling on Tuesday, both sides win.