Nathan Hubbard, former CEO of Ticketmaster, dropped a scorch-the-earth essay on the state of concert ticketing on The Ringer. Lin-Manuel Miranda, who’s about to haul away a whole bucket of Tony Awards for Hamilton, penned an op-ed piece for the New York Times about how scalper bots swoop in on Ticketmaster every time a new batch of tickets gets released.

In fact, I wrote about the secondary concert market here nearly six years ago and nothing’s changed.

By design, arena tours nearly always require some “gray area” ticketing arrangement for the house or for the tour to keep from losing money. Even though some artists hold back prime inventory for their fan clubs, many more productions push their reserved seats directly into the pipelines of ticketing agencies that don’t even bother to have a presence online. They already work with large corporations, hotel concierges, and wealthy fans who know they can’t always count on transparent markets like StubHub to get verified tickets.

As an independent, working artist, there’s something you can do to counter this situation:

It could be a house concert. It could be a small gig at a venue that doesn’t normally host live music. It could even be a showcase night you stage with three or four companion acts.

Think you can’t do it?

Long before Hamilton was scoring $2,000 a ticket on StubHub, it played for about six months as an off-Broadway workshop. You could have gotten in fairly easily, if you were willing to listen to critics and take a little risk with your time and money.

Sure, Lin-Manuel Miranda was already a known entity on Broadway when Hamilton debuted. But I could say the same about hundreds of other acts that are routinely playing 1,500 seat venues right now. At a benefit Lori and I attended the other night, Waxahatchee’s Katie Crutchfield noted from the stage that she and Hop Along first played on a bill in Philadelphia a few years ago, to an audience of just four people. (Their gig that night raised $200,000 for charity.)

Your perfect audience isn’t just a group of people who will love your work once they find out about you. They’re patrons of the arts, lovers of music, and early adopters who are just as frustrated about “mainstream” ticketing as you are. Go make something great for them, and sell your first thirty tickets. 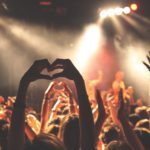